Although I had prepared myself and Grace for the trauma of Gotcha Day, nothing can compare with the emotions. Cate was brought to us smiling and beautiful. In a matter of minutes she was hysterical. The guide and the nannies kept telling her, "This is your mama, this is your sister, this is your grandmother." She said "No, they are not!" and screamed. Grace became hysterical asking, "What's wrong with my little sister?" She, too, became inconsolable. I was walking down the street in Nanning carrying two heavy girls who were sobbing. Later at the hotel they calmed down and played. Cate allowed Grace to rub her shoulder, which comforted Grace. Cate even began to smile and allow me to hug and touch her. At one point, Cate pointed at Grace and said "Jie Jie" (big sister). But when bed time came the tears began again. She refused to sleep near us so I made her a pallet on the floor. She lay down holding tight the bag of snacks her foster mother sent and cried herself to sleep. It is 2:00 am and she has awoken crying twice. I am hoping for a better day tomorrow, otherwise I may be the one sobbing.
Posted by Anne at 4:30 PM

Anne, my goodness! This is sounding so heart wrenching and difficult. I'm sending you ALL a big hug. I cannot even imagine what you are all going through. Hopefully each day will be a little better.

Know that I am thinking of you at 2:00 a.m. dealing with my big girl who will not stay in bed and my boy who is starving.

Ann - we'll be praying for you today.

Often the first few days are very difficult when a child has been in the long term care of a foster family who really loved her.

Keep your chin up!

Ann,
We are thinking of you and know that it gets easier each day, these girls are SMART (part of the problem is they are too smart!) but distractions and Jie Jie will help tremendously!
Prayer for all,
Kat's momma
Vickie

I am so sorry to hear you had such a rough day. We prayed for you as I put Lindsay to bed tonight. I remember how difficult it was with Grace, but it did get better. I am sure Grace will be a distraction for Cate. It's amazing how children can comfort each other. We love you all.

Bless you all with this transition. Change is always difficult, but the outcome is more than worth all the effort. We will all have to find a way to make Cate feel loved and wanted and I am sure she already feels that from you all. We all pray that the love will shine through all the doubts and fears and the darkness will be overcome with the morning light. You all have never left our thoughts and I hope you fell all the love that is sent your way.
Poppy and Marla

Anne, hang in there! It will get better. We're all thinking about you here at Pace.

Hi Anne and Grace,
We miss you both, but we (the children) understand that you have important jobs to do in China! Our Friends in North Drive Two have not stopped mentioning how much they miss her, and their excitement to meet Cate. We wish you the best and we will be waiting to read what happens on day two with Cate and our new big sister Grace!
Congratulations!
North Drive 2 Friends and Teachers (Kathy and Jessica).

About Cate (Qing He)

Qing He is a wonderful little girl born on April 5, 2004 in Qinzhou, Guangxi, China. She has a foster family that cares for her but needs a forever family. Far away across the ocean is the family of Anne and Grace who need a little girl just like her! 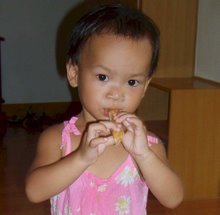 soon to be Catherine Dianne QingHe 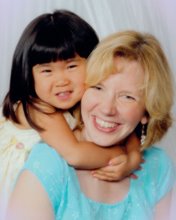 (Grace is the big sister)